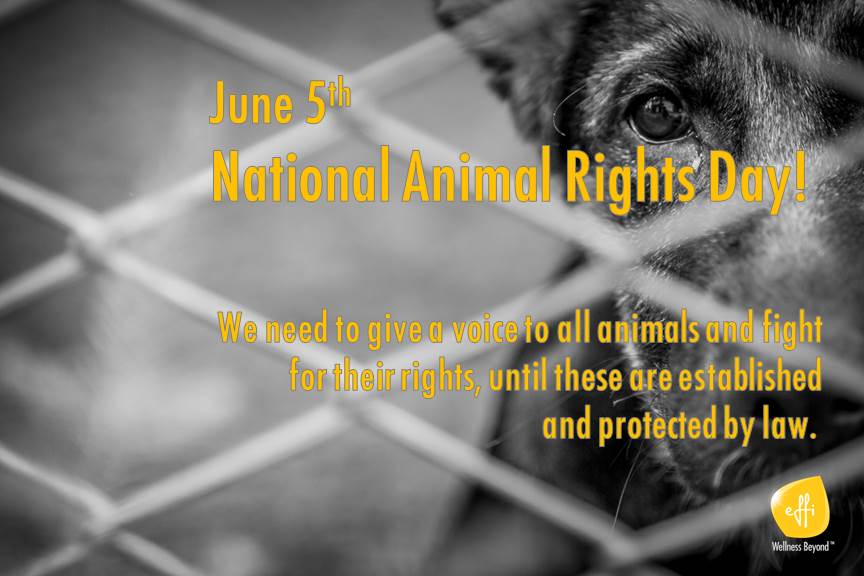 On June 5th, special National Animal Rights Day events are held in major cities across North America. They start with a requiem ceremony for the billions of animals who die every year by human hands, proceed to the reading and signing of The Declaration of Animal Rights, and end with a celebration of the animals in our lives, and the steps that are being made towards ending their suffering and shifting the planet to a cruelty-free, plant-based, lifestyle.

We want to emphasize and applaud to our favorite Animal Rights Associations who dedicated themselves to enhance the welfare of animals  and educate local communities.

The Animal Hope and Wellness Foundation is a non-profit organization focused solely on rescuing abused dogs and dogs from the meat trade throughout Asia. They rescue them, provide full rehabilitation services, and then work to find them perfect homes.  What makes this organization different from other rescues is that the animals they take in are not only shelter animals or strays. They are animals that have been beaten, kicked, shot, run over, used for gang initiations and have been waiting for the day that someone would come to save them. The Animal Hope & Wellness Foundation is located in Sherman Oaks, Ca.

Marc Ching, founder of Animal Hope and Wellness non-profit, is a holistic nutritionist for animals and started the foundation in 2011 after he realized he could use his abilities to rehabilitate abused and neglected dogs in need and place them into homes. Then in 2015, he heard about the Yulin Dog Meat Festival in China and decided to travel there to learn more about it. Once he arrived, things were much worse than he could have imagined. “The abuse and inhumanity is so brutal out there that it doesn’t compare to anything here in America.” After Marc returned home he knew his life would never be the same.
“…the greatest thing in the world, is not found in death. It is found in breathing life into others.” — Marc Ching, founder.

The Gentle Barn is located in Santa Clarita, California. They’re a non-profit animal rescue sanctuary and they also help “at risk” kids. At The Gentle Barn, they work with children from the inner-city, group homes, mental health care facilities, foster homes, and schools to teach them that even though we are all different on the outside, on the inside we are all the same and are deserving of the same rights, respects and freedom.

All of The Gentle Barn’s animal residents have been rescued from severe abuse, neglect and abandonment. Through a plethora of services including acupuncture, acupressure, surgery, physical therapy, hot/cold therapy and water therapy (not to mention lots of love) their animals return to a state of proper physical and psychological health.

Farm Sanctuary was founded in 1986 to combat the abuses of factory farming and encourage a new awareness and understanding about farm animals. Today, Farm Sanctuary is the nation’s largest and most effective farm animal rescue and protection organization. They have rescued thousands of animals and cared for them at their sanctuaries in Watkins Glen, New York; Northern California (Orland); and the Los Angeles area. At Farm Sanctuary, these animals are friends, not the food. They educate millions of people about their plight and the effects of factory farming on our health and environment. They advocate for laws and policies to prevent suffering and promote compassion, and they reach out to legislators and businesses to bring about institutional reforms.

The People for the Ethical Treatment of Animals (PETA) has made a huge impact and supports the largest animal rights group in the world. They are located in Northfolk, Virginia and boast of more than three million members. They focus their attention on four main aspects in which a huge number of animals suffer the most-in the clothing trade, on factory farms, in the entertainment world and laboratories. They also work on a variety of additional issues like cruel killing of birds, beavers, pests and even crimes against domesticated animals.

5. Humane Society of The United States

The Humane Society of The United States (HSUS), which is headquartered in Washington D.C., was founded in 1954 and specializes in two major aspects: fighting cruelty and celebrating animals. The incorporators of HSUS included four people—Larry Andrews, Marcia Glaser, Helen Jones, and Fred Myers—all of whom were active in the leadership of existing local and national groups, who would become its first four employees. They believed that a new kind of organization would strengthen the American humane movement, and they set up HSUS as the “National Humane Society,” to ensure that it could play a strong role in national policy development concerning animal welfare. HSUS’s guiding principle was ratified by its national membership in 1956: “The Humane Society of the United States opposes and seeks to prevent all use or exploitation of animals that causes pain, suffering, or fear.

Since times immemorial, dogs have been known to be a man’s great friend. With this in mind, the Best Friends Animal Society fights it out to keep it that way. Based in Utah, the organization was rolled out in 1984 with the sole intention of providing loving and safe homes for cats and dogs. The other mission of the society is to stop the killing of animals. Before the organization was founded, close to 17 million animals were being killed annually. However, the number today stands at just 4 million.

LA Animal Rescue’s mission is to change the end of the story for all of the homeless and abandoned animals they meet by practicing the 3 “R’s”: Rescue, Rehabilitate, and Rehome.  No Pet is denied access based on breed, age, health or size.  They do not dwell on their past or judge the people involved in their circumstance.  The goal of LA Animal Rescue is to usher them forward, change their course and provide their happily-ever-after.

Denver-based Dumb Friends League was founded in 1910, with an aim to speak for those who are unable to do so. The organization shelters and cares approximately twenty five thousand abandoned and lost animals each year. They also pair homeless animals with new owners, reunite lost pets with their rightful owners, review instances of cruelty against animals, support animal-friendly laws and provide education on animal treatment among others.

PetSmart Charities is a retail chain that foresees a loving and caring home for every pet. They also promote great relationships between pets and people. This includes its adoption programs where five million pets were claimed to be adopted by the organization as of June 2012.

The San Diego Humane Society and SPCA boast of being in the business for a whooping 135 years. They operate only in the San Diego area and have the following programs: adopting and sheltering animals, emergency rescue efforts for animals, training pets and reviewing animal cruelty cases.

The San Francisco SPCA was founded in 1868. They coordinate cat and dog adoptions, runs a veterinary hospital-popularly known as the Leanne B. Roberts Animal Care Center; holds youth programs and therapy sessions.

The Lange Foundation (a nonprofit 501(c)3 organization) was founded in 1993 by Gillian Lange, recipient of the 1980 City of Los Angeles St. Francis of Assisi award for her rescue work with impounded animals since 1974. Lange founded the Amanda Foundation in 1975.

To date the two Foundations have rescued and placed over 25,000 cats, dogs and horses who would otherwise have been destroyed in overcrowded public animal shelters. Lange and a group of dedicated staff and volunteers works and will continue working everyday to help homeless animals.

EFFi Foods® @EFFiFoods
RT @funnybrad: I’ve set up a GoFundMe to send brave Quaden and his mother to Disneyland. Let’s show a bullied kid that he is loved! https:…
(about 135 days ago)
Follow @effifoods